All topics pertaining to health and diseases that may affect your Tamaskan Dog, as well as treatment.
Post Reply
14 posts • Page 1 of 1

Paka is undergoing surgery Monday (tomorrow) to close a fluid pocket in her gum so her adult tooth can come in properly. (she stabed herself in the upper left gums with her treated teething bone causing inflamation and producing a pocket of fluid that did not close after drainage and treatment.) Our vet is working with a canine dentist to insure her permanent teeth come in correctly and are not affected.

Since general anesthesia is required, we decided to have her spay done at the same time to spare her a second surgery later this year.

This isn't what we planned but weighing the risks, we would rather have the spay done early than have her anesthetized a second time.

Her pretty little face swelled up and she didn't want to eat until the vet drained the fluid. An anti-inflammatory is keeping the swelling down while we wait for her surgery tomorrow.

Of course, since kibble can aggravate the situation, the vet has prescribed canned dog food or fresh meat only (no bones) until after her follow-up appointment to verify her gums have healed properly and her molars are secure. Paka is LOVING the diet

It's true I was looking for a way to win my husband over to raw... but I sincerely didn't want it to be like this.

Still, this just might be what wins Paka her raw diet approval from her Daddy!

sly little thing, I'd almost think she did it on purpose is she wasn't so misserable that first morning.

I'm trying to keep a stiff upper lip and stay strong and pragmatic, but I can't imagine spending Monday night without her while she is recovering at the vet's. And I'd be lying if I said I wasn't worried about her. 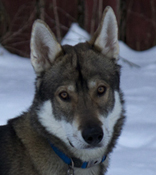 Aww, sorry to hear that. It's never any fun when they hurt themselves and require surgery. On the bright side, at least she has yummy new food to enjoy. Kumho loves his raw diet but has a bit of a food guarding issue with it.

Being an otherwise healthy dog, Paka should do well with the surgeries and recover quickly. If they bury the spay sutures, she probably won't need a cone at all. Though the idea of a skirt is amusing.

Kumho sends kisses to his sister and hopes she feels better soon.
Top

Best of luck to you guys x
Top 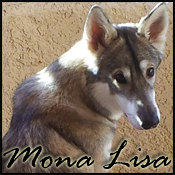 Good luck with the surgery tomorrow, hope everything goes well for her

Thank you everyone. We just dropped Paka off. She was enjoying herself when we left. She likes our vet. We expect to hear from the office around noon with a surgical report.
One's horizon shrinks or expands in proportion to one's courage.
~Nin
Top 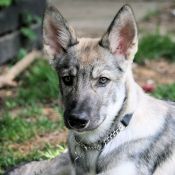 Keeping Paka in my thoughts today. I know how difficult it is when you have to leave them for surgery and none of us like to see our babies in any kind of pain.

I hope all goes well with the surgery and that Paka feels better real soon.

Paka woke up this morning in her own bed with her family.

She appears to not be in any pain but toward the end of her first day home yesterday, she was walking with small steps (to avoid stretching the muscles of her abdomen?) and she is reluctant to jump up or down from the people bed. (which is a good activity to avoid for a few days anyway!)

Her pretty face is back to normal and it turns out, all the vet had to do with her gum was pull out the puppy molar. It was loose and it's movement kept shifting the margins of the fluid pocket preventing them from healing together. With the tooth gone, it's sealing nicely now.

Her spay incision is very neatly sewn and, so far, Paka is mostly leaving it alone. If we do catch her licking, we tell her "leave it" then, if she tries to do it again, we put the cone on her. She seems to have figured out she can get away with just the first lick or two but then, she better stop. I can live with that.

We went for a short walk "around the loop" of our neighborhood. (about 1/4 mile) instead of our usual Wednesday morning trip to the dog park.

It's wonderful having her home, safe and sound.

Thank you for your kind thoughts and well wishes.
One's horizon shrinks or expands in proportion to one's courage.
~Nin
Top

Glad to hear everything went well 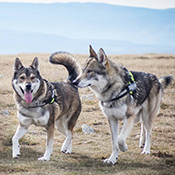 Glad she is doing well,

can't wait for those stitches to come out. 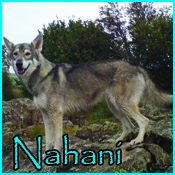 Glad she is doing well and teh surgery went as planned. Good luck for a speedy recovery Paka!