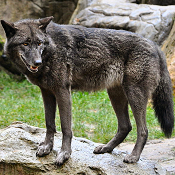 He loves people that he knows, and with some can get over-excited (the only real problem I have with him, while the owners of his siblings seem to have had more problems with their dogs, either being dog aggressive, fearful or too dominant). He's however the most suspicious dog I've had (which was I was asking for anyway, and I've only lived with shelties and a whippet before him), and especially since April, before his second birthday, he started to take his "guard duty" more seriously.

He's especially suspicious when it's dark and if he sees or hears something unknown, he will growl and raise the hair on his back, but if I show him it's just fine (not correcting him but not saying "It's okay, it's okay" like many people do, either), he'll mostly just go back to his goofy self.

He loves dogs however, it's mainly people he's suspicious of. In the neighborhood, there is a German Shepherd and a little "Podengo-thing"

that are what I call "the terrible twos". The GSD goes up in FLAMES every time he sees another dog (not just Wikus). He jumps in the leash, barks and basically roars. It seems to be getting better (last time he walked quietly by Wikus - who was ignoring him - with the back hair all the way in the air, he looked like a Striped Hyena

), but most of the time, that dog seems to go kill-mode on other dogs.

A few weeks ago however, during our late night walk, those two came around the corner with their owner without me being prepared, the GSD jumped and barked as usual, and Wikus ran all away to the end of the leash (something he never does otherwise), and... whined and wagged his tail and wanted to play.

(Trust me, I know Wikus guarding/angry vs. Wikus happee and wanna play.

)
Almost every time that GSD turns up, Wikus thinks the other dog wants to play.

He doesn't get that he wants to rip Wikus to shreds. Me and Wikus, when he was eight weeks old, before I brought him home.

And then me with him and two of his siblings, less than ten months later.

Another funny thing is that while Wikus is certainly the least wolf-looking dog I've lived with so far, he's the most like one when it comes to body language, I've noticed (it's hard to explain without sounding silly, but he has a more vibrant body-language, put simply). The shelties (my mother and sister have one each, male and female, both five years old, and I grew up with another female) default mode is "happy submissive", tail wagging low, ears all the way back, mouth open and wanting to kiss your face. (Mimas, the male, used to give people real tongue-kisses all the way down to the throat when he was around a year old, until he realized it was not appreciated.

My whippet (who I only had for sixteen months before the breeder stole him back, long story short... I'm sure you know about those types of breeders who do whatever they can for their own gain) basically had his pokerface on 24/7. He was happy when he was playing, running around, when we went for walks and when someone got home, but he didn't do much more than wag his tail and kept his pokerface.

Wikus is "the dog of a thousand faces" compared to my whippet.

Just for example, I tell him he's been bad (but in a "cheerful" way), he wags his tail low, ears back, and licks my mouth in that "I'm sucking up to you-manner". The same - but more excited - when I tell him we're going for a walk or something else that's fun. Like I said, he can get too excited with some other people, who he's never properly learned to be calm around. He would never dream about jumping up on me in greeting, but he does it with some others.

He also has a rather tough pshyche, not in being stubborn or hard-headed, but it takes a lot (especially when he's excited and happy and wants to greet some of the previously mentioned people) to make him stop greeting people or dogs so excitedly, and especially when someone else does it, he just thinks... they want to play.

The same when he was a puppy and wanted to play with for example Mimas (come to think of it... it's the same to this day

). Mimas is not a dog with a lot of authority, and if he growls with all his teeth bared and clearly shows Wikus that he wants none of it, Wikus... gets super happy.

On the other hand, when Wikus was a puppy and had a Rottweiler playmate (a huge, grown male who mostly just ignored him), and the rottie walked past him, Wikus threw himself on the ground. "Don't eat me, I'm nice!"

I know I'm mentioning "submissive" and things like that here and there, and to me, a submissive dog is a happy dog, one that is relieved that someone else takes care of things. One that is polite and - for example - comes running when you get home, wagging its tail, tail low and head low, but certainly not cowering before you or anyone (that is not respect or a happy dog, it's just fear

), and not jumping all over you either.


(You may think it weird that I say "muff" and then tell him not to bark, but the "muff"
is for him to do the same or start playing, not barking that loud.


And then this one, which I believe you've seen before. He loves to howl, and I've "trained" him with wolf howling since he was a puppy. Back then, only wolves were good enough for him, but nowadays, he'll start howling at any video of dogs howling or whining, or hearing the videos of his breeder and siblings. Poor thing.

What great pictures! He's a cutie and I love the rope bone photo.
"Until one has loved an animal, a part of one's soul remains unawakened." ~ Anatole France

Apparently, the food bowl makes an excellent pillow. I'm not sure what's wrong with the blanket behind him...

His ear was all standing up, I thought it looked funny and wanted a picture, but he kept turning his head to look out the window, flopping the ear over. Thus this picture.

I ended up cheating.

Poor thing is being assaulted in his mid-day nap. Except for the puppy picture, me with his siblings, and two crappy pics my dad took when he came on a visit over a year ago, I have absolutely no pictures of me and Wikus together, so this... had to be done.

"What does a dog have to do to get some sleep?"

Then the star of the show had to take a break.

I had to bribe him with a treat on the camera to get this picture. He's looking at the camera, I look drugged.

He really doesn't want to be there.

I got meself a wet kiss. (Probably just to make me stop.

I strained my neck and Wikus decided to use me as a pillow.

The star requires a break and a nap.

The one with the treat reminds me of our shepherd mix's expression whenever she sees a treat, I would have to do the same to get her to look at the camera.