If you are new to the International Tamaskan Forum, please introduce yourself here.
Forum rules
Please CLICK HERE to read the Forum Rules!
Post Reply
27 posts • Page 1 of 1

Hello all! Let me briefly introduce myself. My name is Alex, and I'm twenty-five. Soon I'll be married and go back to living in the US, hopefully in Wisconsin, which is where I grew up. Currently, my fiancee and I live in Italy--I'm half-Italian, she is 100% Italian. I've read this forum for a bit, and am at least a little bit familiar with the breed, though I would like to know much, much more.

In about eight months, we are planning to get a female Czechoslovakian Vlcak puppy. Eventually, we'd like to get a second and possibly a third dog. We'd like to get a dog that will compliment what will probably be our high-energy, athletic Vlcak--essentially we'd like a dog that will play well with her and that will get along with our (hopefully) growing family. Do you believe that a Tamaskan would be a good fit? My future wife and I enjoy doing physical activity, such as running, biking, and hiking. Do Tamaskans enjoy such activity? Are they athletic? Are they good with dogs of similar size? Are they active? From what I've read, they are an "easier" breed to handle. How would that be possible if they have extensive amounts of husky, malamute, and GSD? I know one could hypothetically breed those traits out, but my guess is taht such an endeavor would take time, as huskies and mals have had their temperaments for thousands and thousands of years. Or is breeding that out easier than I thought?

Also, I have some other questions, if I may. There were five rescue dogs that were used as the foundation stock; how many other breeds were included? How many generations into the breed are they? What is their hunting drive and overall activity level like? Are they purchasable in the US? I heard that there's a breakaway American breeder that has founded the unaffiliated Tamaskan wolfdog. Is there any info on him, or any thread that I can look at? And finally, how much do they cost?

I do not see any issues with having a Czech and a Tamaskan together, I think a few here on the forum have done the same thing. Tamaskan can be very active but I also think they have a desire to layback and relax especially in the house. I have hooked my Tamaskan up to a sled and a bike and he loves giving the option to run. My tam is freak with other dogs although a little to bouncy for small dogs. I think how easier they are depends on the line you get your dog from, some are more husky like ten others. My tam is challenging in some ways and in other ways very easy. The history of what dogs where used is not completely known. We are still breeding generation one tams but I believe we have also bred up to generation five Tamaskand. There are several breeders in the states and all of them are on this forum too. The price differs depending on your breeder, but here in the states they are all around 2,000 dollars. Much more information can be found on this forum too.
- Kate -

If there is any more information I'd be interested to hear it. For example, how much (if any) Saarloos was used to create the breed?
Top

If there is any more information I'd be interested to hear it. For example, how much (if any) Saarloos was used to create the breed?

To my knowledge only one and none of those offspring have produced pups yet although many of them are in breeding homes.
- Kate -

Hi and welcome. There was one sarloos used in this breed, but not as a foundation dog.

If there is any more information I'd be interested to hear it. For example, how much (if any) Saarloos was used to create the breed?

As far as we know, only one Saarloos has been used in the Tamaskan breed in 2009. He is known as "Blustag Apache Horse" on TDR pedigrees, but his official registered name is Djoser van Rijnecker Hoff (Bobbi). He was used to sire the 2009 Muensterland litter. A couple dogs from this litter that I can name off the top of my head are Konah vom Muensterland at Wolfsbane (Netherlands) and Jaeger vom Muensterland at Tarheel (NC, USA).
Top

Hi and welcome to the forum!
I believe there is one living in France with a Tamaskan and some Czechoslovakian Vlcak. From my experience, my boy is very laid back, does not need lots of exercise but does enjoy it. He loves playing with other dogs of all sizes, and gets on well with my cats.

Welcome, my dog Saga is very good with all sized dogs as long they are confident, if they run she just thinks its a good game of chase. She is reasonably trainable, not as good as a German shepherd I would say she is similar to my terrier or a bit easier.
Top

Welcome aboard the TDR Alex.

You've come to the right place to learn more about the breed!

TeresaC. You consider yourself from Wisconsin?

Look how you spelt our beautiful state!!!

Welcome! I do wish you were here now, because our Annual Breed Show is in Madison this year! Perhaps it will be in Madison again next year and you could join us.
Italy, huh? Jealous. I'd like to get there someday and see the village my family is from

I have 2 tamaskans living with 3 other wolfdogs and several husky's. And Miran has Tamaskan living with Saarloos and Czeck.
It has more to do with the individuals if it works out or not
Top

Karen wrote:I have 2 tamaskans living with 3 other wolfdogs and several husky's. And Miran has Tamaskan living with Saarloos and Czeck.
It has more to do with the individuals if it works out or not

And you also have some coy-dog cross as I recall from Debby's Tamaskan Vodcast video. Are they still there?

. . .though don't be jealous. Italy is going to hell in a handbasket.
Top

Karen wrote:I have 2 tamaskans living with 3 other wolfdogs and several husky's. And Miran has Tamaskan living with Saarloos and Czeck.
It has more to do with the individuals if it works out or not

And you also have some coy-dog cross as I recall from Debby's Tamaskan Vodcast video. Are they still there?

Yes! But generally I refer in public to them as wolfdogs 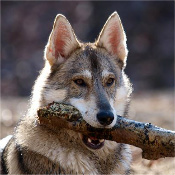